Recently while in Turkey, we made arrangements to take a 10-hour overnight bus ride from Pamukalle to Cappadocia.  I can’t imagine an endeavor like this being fun even on the most modern of highways in the United States. This being the case, I had zero expectation that the rugged and rather primitive roads through the middle of BFE Turkey would be “pleasant.” However, the distance between locations and our scheduling challenges made this the only feasible option.

So there we were. After an awesome day exploring the ruins and calcium deposits of Pamukalle, we boarded a bus in Denizli. As we pulled out of the station, we were headed towards the fairy chimneys of Cappadocia in central Anatolia.  By this point there was no turning back. Mental reservations be damned, we were now totally committed to this half-hatched idea. 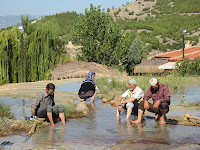 Prior to my arrival in Turkey I had read about gender segregation on buses, but it seemed like it was rather trivial. It wasn’t until we purchased our tickets and started our trek across Turkey that we realized how strictly these rules were enforced.  Turns out, it is actually a big deal. Here is how it works: The buses designate a certain amount of male seats, and a certain number of female seats.   Also, there seemed to be a few mixed seats occupied by couples in the middle. In general though, the gender segregation was disturbingly consistent.

Beyond the annoying insult of feeling Rosa Park-ed, this issue became a hassle at the practical level too. I honestly don’t know what was the bigger pain in the neck- having to move to new seats whenever new people boarded the bus or the literal pain in my neck caused by the uncomfortable seats. Being forced to move happened repeatedly. Sometimes these experiences were even accompanied by aggressive interactions, which were both intimidating and altogether unpleasant.

You may be wondering how I reacted to such treatment… 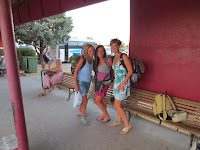 At first, I subconsciously rolled my eyes with distain, thinking how sad it is that Turkey is still so far behind the times. I thought they were supposed to be a modern-slightly-secular-democratic-we’re-not-technically-a-Muslim-country, country. What-evs, they’re like 99% Muslim and still rub shoulders with some less-than-progressive Middle Eastern neighbors.   And if they’re going to go all old school gender apartheid, you’d think they’d at least be somewhat gentlemanlike about it… Do we really need to be confined to the back of the bus, and even forced to use a separate entrance?

As the night wore on, my frustration levels began to climb.

The bus ended up stopping multiple times along the way. At one particular stop there was a sign for a “WC” and I was relieved to be able to use a restroom after consuming so much water (gotta stay hydrated while traveling).  Much to my dismay I discovered my 1 lira only bought me the opportunity to squat over a whole in the ground… Ugh!

Somewhere between hour-four and hour-six we were moved again, this time to the very back of the bus.  We weren’t entirely unhappy about this because it meant the three of us got to sit together, and we actually had 5 seats to ourselves – kind of nice!

Around 2am I was desperately trying to get comfortable and fall asleep.  Apparently my perv-radar was still alert and going strong, even though I was fatigued and fading fast.   I noticed the man in the seat in front of me peaking through the crack a few times.   This was no real surprise; we had been eyed like zoo animals at every stop along the way.   We actually started referring to ourselves as the Madagascar characters.   Picture us as Marty, Melman, and Gloria cruising across the desert...  By the reactions we received, you would have thought we were pink polka-dotted elephants standing on our back-legs doing Jello-shots.   What did come as a surprise however, was the hand that slowly came between the two seats and gently grazed my lower leg.  Huh. This was interesting.  While all the sirens in my head were sounding, I didn’t want to over react.  Maybe the wandering hand was attached to a body that had fallen asleep, causing the hand to just “drop” and touch my leg.    So I simply repositioned myself and moved my leg to the point where it was clearly out of the way.   Sure enough, the hand made its way over to my leg once again.    Now I was pissed.   If this were happening at home, I would have already knocked this guy’s groin through his teeth.  But my options were severely limited given the fact that I was surrounded by a busload of men who didn’t see me as having equal rights.   This cat and mouse style leg fondling went on for far too long, until I finally pulled my legs up and laid them across the seat.

Eventually, mercifully, we arrived at our destination. There a respectable company picked us up and transported us to our launch point for a 5:30am hot air balloon ride to watch the sunrise over the magical chimneys of Cappadocia.

Cappadocia was well worth the long bus ride and maybe having my 3-day leg stubble ruffled.  By the way, while the disgust of the leg molester was still haunting me, I couldn’t help but chuckle as I remembered how I splattered pee all over my ankles in the bus stop bathroom trying to use the hole-in-the-ground toilet.  Hey perv, I hope you enjoyed my secret combo of sunblock and urine!!

Here are some pictures of the amazing natural wonders of Cappadocia. 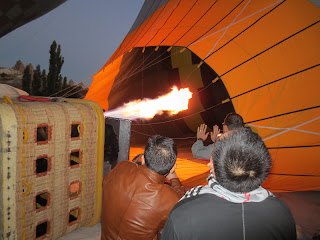 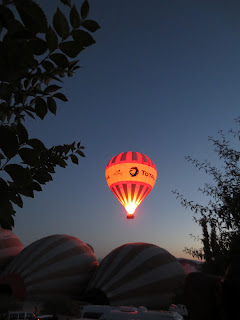 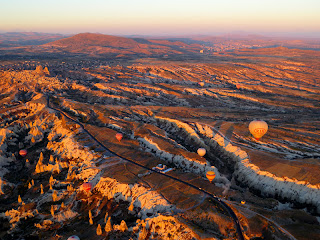 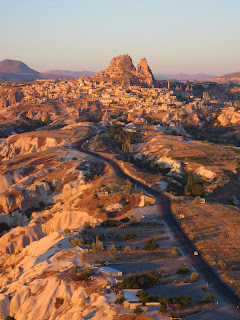 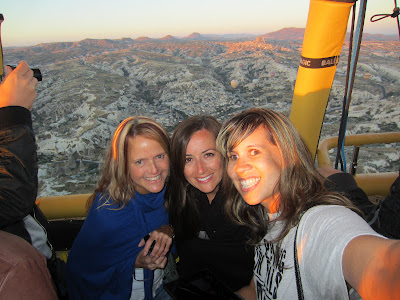 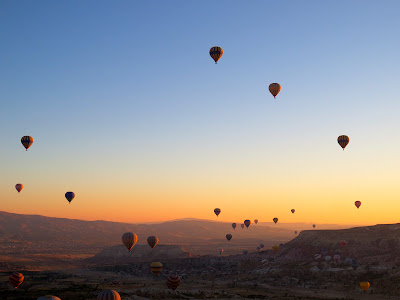 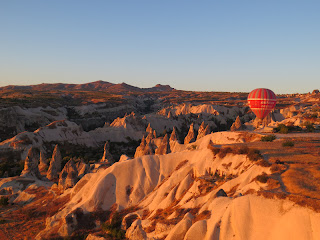 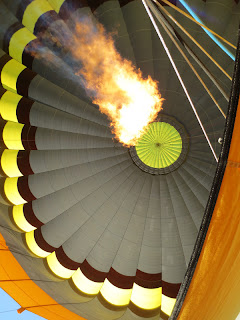 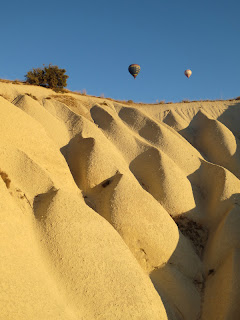 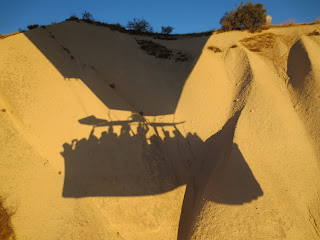 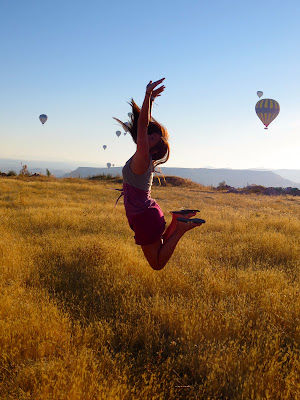 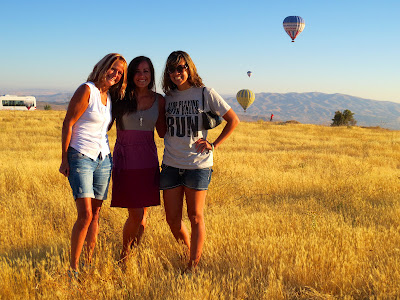 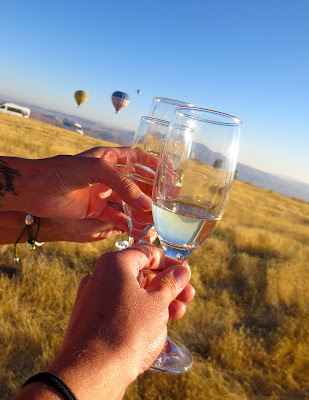 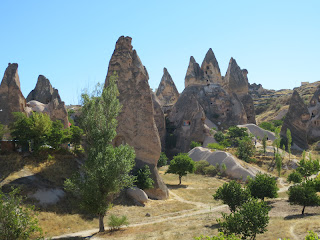 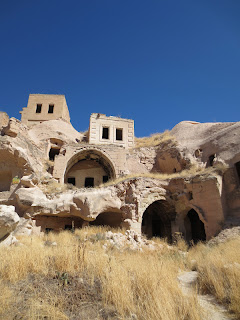 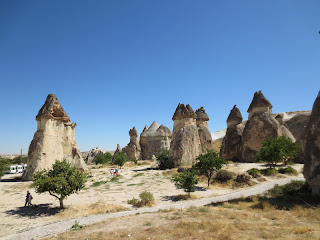 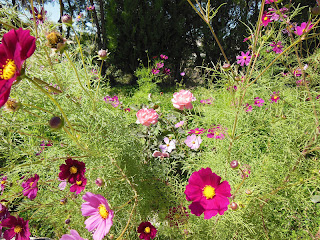 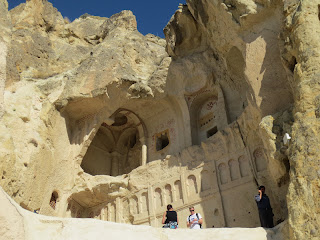