How the right Tampon size, can make Christmas last a little bit longer.

Normally I would say that I am someone who is quick on her feet.  It is a rare occasion when a witty response can’t be found at the tip of my (somewhat wicked) tongue.   But even this sarcastic heart has moments of weakness... moments when the world shifts on its axis, and the kneejerk verbal reflex is paralyzed.

I experienced one of “those” moments this past weekend when I went to get my Christmas tree...

Patiently waiting, I took a deep breath of the crisp December air, and was whimsically carried away by the Christmas spirit.   For a few moments I stood there pondering the many reasons I had to be thankful...   The glorious sunshine touching my face, the intoxicating smell of all the Christmas trees, the wonderful people in my life, the excitement of knowing my family would soon be gathered, the joy of being able to give to others… You know… the sappy crap that old school Christmas movies are all about.

Unfortunately, at this point my Hallmark movie moment came to an abrupt end. A loud, burly voice crashed through my mental oasis like a freight train! “I don’t know what size tampons you use, hope it’s the small ones, they work the best,” said the scruffy man.

Hhhhhhmmmm… Seeing that returning to my sentimental sanctuary was no longer an option, I decided to engage the flannel-loving farmer who was inquiring about the contents of my bathroom cabinet.   I replied playfully, “Well, this has now become the most interesting conversation of the day! Oh please tell me what tampons have to do with you, selling me, a Christmas tree.”   The two men went on to tell me their secret to having an award winning Christmas tree every year (yes, there are actual competitions).   Apparently, if you want your tree to remain hydrated throughout the long holiday season, there are a few tricks of the trade that only the most elite are privileged to know.

With a sense of profound pride (and absurd seriousness), these fine gentlemen explained that the big secret was to drill a hole in the trunk and…  insert a tampon.  One cannot make this up. I proceeded to learn that doing so creates a perfectly crafted wick. Thus, water will be drawn up into the tree’s interior, increasing its absorption and hydration.  Additionally, the first time you water your tree, boil the water in a kettle first, and pour it in while it is still hot.  After this you can relax a bit, future watering is allowed at room temperature. 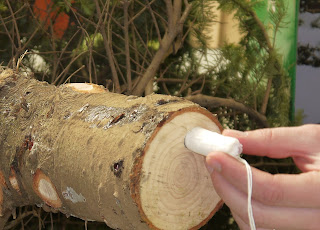 Ever had one of THOSE days??

It was 3:18 in morning when my dog Riley's crying & whining woke me from my peaceful slumber. All 87 pounds of his blonde fur was trembling, and he was completely inconsolable. It only took me a few hazy seconds to realize why he was so worked up... it was the awful high pitch chirp of the smoke detector! Doh!

Knowing full well there was no way my sweet puppy would calm down until that horrendous ear piercing sound was gone, I resentfully got out of my warm bed, rummaged through the kitchen drawer for a battery, grabbed a barstool, and changed out the battery in the evil device. Ha! Back to bed for me!

Well so I thought... Apparently this demon-possessed alarm was not satisfied with its new power source... Before I was even off the stool, it again started to squeal (this time mocking me with every chirp).

Frustrated but not deterred, one by one, I tried every battery in the 4 pack, in an attempt to silence the beast... but to no avail.

At this point I decided the whole pack of batteries must be bad, and resign myself to the fact that I would be making a 3:45 am trip to Walgreens. Coatless, braless, dressed in a tank top, shorts and Ugg boots, I loaded my distressed dog into the car, and drove the half-mile to the always open Walgreens. Upon entering, the two sales associates who were shamelessly flirting with each other seemed rather unimpressed with my unkempt curls, half dressed appearance, and troubled golden retriever. Not sensing my mood, they felt it appropriate to convince me that I needed to get a Walgreens card (Seriously?? I'm half naked, buying batteries at 4:00am! Do you think I give a $@!%! about saving $1.20??). Exiting with a brand new package of hope and a sure sense of triumph, I hopped back in my car, and headed home.

Repeating my previous procedures, I confidently installed one of the new batteries. Then just as I started to get off the stool, there it was again... that awful sound!!!! CHIRP!!

Appalled by this defiant device, I resorted to Google for help. The fine people at Google suggested that I trip my circuit breaker, and then test the alarm to clear the bad juju. Side note: By “testing” they mean, holding down the button until the alarm sounds for 30 seconds- hooray!!

“Sure…I'll gladly climb over the recycling bins, totes, and bikes with my bare feet to get to the circuit breaker," I said to Riley as he cried behind me in the cold garage. After reaching the box, I turned the power off, waited 30 seconds, flipped the switch, and headed back inside.

Whhhhhaaaattt?? Why are there now 4 alarms screaming at me?? Holy hell, tripping the breaker made all of my alarms freak out.

Before becoming completely incensed, I put the dog outside, screamed in my pillow, regained composure, and then changed out all 4 batteries in all 4 alarms (good thing I bought the value pack). However, even after I changed out all 4 batteries, all 4 alarms continued to chirp. But this time they were louder, and back-to-back. Their mocking screeches had even started to sound angry!

Google and all other resources had failed me at this point, and I didn't know what to do. Clearly, my only recourse was to burn down the freaking house, and flee with my traumatized dog. Sometime during my search for a fuel source and matches, my sanity returned, and I decided to call the fire department for help instead.

The fireman who answered the phone (who I imagined to be tall, dark, muscular, and overly compassionate) seemed to be amused by my threats to burn down my house in lieu of a short sale. TDM fireman validated all my efforts and skilled detective work (clearly he was also intelligent for recognizing my brilliance), and suggested that the issue might be related to my security system. He suggested that I find the lock box that is usually hidden somewhere in the house, and check that battery (apparently they are only good for 6 years).

Ah-ha! I had seen said box in my closet before, so I eagerly dash to the closet only to find the metal box locked!! If TDM fireman wasn't still waiting patiently on the phone, I assure you the profanity that would have come out of my mouth would have had Riley shaking more than the alarm! All bets were off now, I ran to the garage, grabbed a hammer and screwdriver - and announced that this b!% was going to open! I quickly thank TDM fireman for his help and hung up the phone. One hard swing and the door flung open. I detached the odd shaped battery completely convinced it was the culprit, and then Riley and I were off to make another trip to Walgreens. My frustration almost turned to tears when Thing 1 and Thing 2 at Walgreens inform me that the battery I needed to relieve my affliction was not something they carried, and that I would most likely need to go to a special battery shop. It was 5:15 on a Saturday morning!! Not an option!

I returned home to find my garage door open... Hhhmmm that's weird! I tried to close the door multiple times with the different openers, but nothing worked, there was no power! Did tripping the breaker short out my garage door?? Of course it did!!

Barefoot and on the verge of some form of psychotic episode, I unhook the automatic opener and manually pull down my garage door. Defeated, I walk into my house, put the dog in the backyard and scream into my pillow AGAIN. I decided the only thing worse than suffering, is suffering alone. In no time at all, I had stirred my unsuspecting boys in Seattle, and my older brother was on the phone telling me how to pull the wires out of the ceiling and severe the connection. He found it necessary to remind me how much easier it would be if I had the new iPhone with FaceTime, so he could see what I was looking at -thanks for the salt in my wounds bro! A little intimated by the idea of being electrocuted, and the near insanity of two hours of constant chirping brought me to said point where I declared... “I give up.”

The dog would freeze to death outside, and I would go down in flames with my house. The white flag had been waived. Final score: Alarm gods take all!!
Posted by Rachelle at 1:50 PM 0 comments